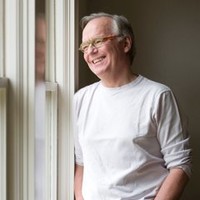 Laurence Miller began his visual arts career in the late 1960’s as Director of Theme Exhibitions for Hemisfair 68. In the early 1970s, he joined the adjunct faculty of the University of Texas at Austin and the staff of the Harry Ransom Humanities Research Center as a Special Assistant to the Chancellor and Curator of Literary Iconography. From 1974 to 1990, Miller served as Director of the Austin Museum of Art (formerly Laguna Gloria Art Museum). In 1990, he formed a consulting group to assist non-profit visual arts organizations with program development and strategic planning. In 1993, he was appointed Senior Advisor for Programs at Artpace, A Foundation for Contemporary Art in San Antonio and from 1995-1999, he served as the organization’s Founding Director. He held the position of Artpace’s Senior Advisor for Special Projects until November 2001 when he became Director Emeritus. In the spring of 2002, Miller founded Fluent~Collaborative (formerly baluartecreek.org). Fluent’s two primary projects ...might be good, a contemporary art e-review, and testsite, an exhibition platform for collaborations between artists and writers, have received international attention. Throughout his career, Miller has been pro-active in professional organizations at the local, state, and national level.